skip to main | skip to sidebar

We had some fantastically good news this week - just yesterday in fact - the news that Peggers was selected as a teacher's aide for a special education program at our local high school, which is just wonderful. Unfortunately, though, I have also been (mentally) slammed with a ton of bad news this week as well.

And unfortunately, the bad column currently far far outweighs and outranks the good.

My paternal grandparents are having some major medical problems at the moment - my 91 year old grandmother is beginning the slow, painful descent into dementia. And as my 89 year old grandfather - her sole caregiver - is currently in the hospital recovering from hip replacement surgery, this is a difficult time for the family.

On my mom's side of things, my stepfather, who has finally recovered from cancer and appallingly painful and complicated gallbladder surgery just a few months back, found himself back again in the O.R. this week - a blocked bowel that had left him in severe pain & horridly emaciated. The surgery went well, overall, despite their having to remove over 2 feet of bowel, however this morning he has no feeling in his left arm from the elbow down- - a new - and obviously unwanted - concern.

Then, the final thing that absolutely sent me over to the retail therapy edge seeking some relief, was the news last night that one of the dearest, sweetest people in the world - a college friend who means the absolute world to me - is back from her life abroad in South East Asia due to health concerns. An ultrasound earlier in the week shows a large mass on her liver, and she's at the urologist today finding out what information she can - but thoughts of liver cancer are certainly at the forefront of everyone's mind.

So I ran to do a little buying/knitting therapy - thinking that I needed to create something for myself that is soothing and comforting - something I can wrap up in and hunker down with to ride out this latest wave of pain and fear that is heading our way. And so I have discarded my thrifty plans of recycling an old wool sweater into a custom dyed version of Linear. Instead I just purchased 8 skeins of this in a shade that only Brooklyntweed can properly do justice. Not the original colour I had in mind, but certainly a beautiful shade that I'll happily wear any day. 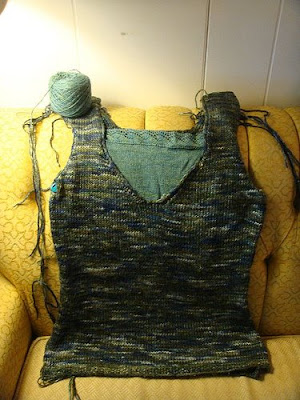 {In my defense of my original plan to pace myself (vis-a-vie my progress on the silk tank I'm knitting up for Gryphon, seen above) let me say that I finished the knitting & re-knitting on the body just last night. I'm casting on for the two silk/cashmere side-panel triangles tonight & will work on them like the devil.........only taking breaks to pet my new yarn (once it arrives!) every now and then.}

Nothing like the shiny-bright promise of a new project to get a girl moving along! 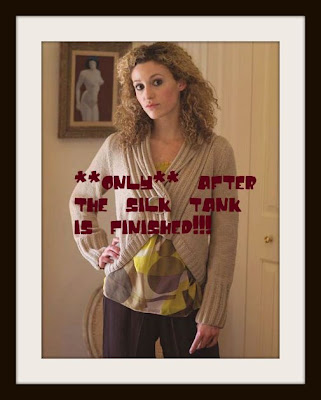 The Twist Collective is up!

I'm not too sure how thrilled I am at the idea of having to buy the patterns one by one*, but the alternative (buying a whole book just for one stinkin' decent pattern, as I'm currently considering doing with Norah Gaughan's Volume 3 just so that I can get my hands on the single pattern for 'Linear' ) is sure a lot worse!

*(plus, I really like the way that it fairly treats the designers, you know?)

We're making progress in our little corner of the world - Peggers has had several job interviews, and the best interview that he's managed to score yet (where, I might add, he's the *only* candidate and pay - while appallingly low - nonetheless includes tuition remission for his future graduate classes & full benefits) is next week. We're both really excited about where our future seems to be going.

I've been hitting the gym with obsessive regularity (easy to stop worrying about how the bills are going to get paid or where our little family will be in the grand scheme of things 8 months from now when every single brain cell is totally needed to keep yourself from not mis-running a step on the treadmill, falling off, and breaking both your legs) and the results have been quite satisfactory. While I might be too tired to stay up nearly as late - knitting - as I used to, I've dropped about 2 clothing sizes and now do well over 150 crunches a day. Not bad for a girl who used to top out at 12 (weak) crunches total. Amazing for the stress levels - amazing.

I've been knitting some when I can - mostly on Gryphon's silk tank, which is about 90% finished, on a friend's birthday hat (happy belated birthday, Eric!), and I finally finished up my co-worker's lace shawl after casting on for it last October. Unfortunately, we lost our digital camera right around the time that the law office downsized and 'lost' their one & only paralegal - hah! - so not a lot of recently-taken pictures floating around here at the moment. However I've borrowed a digital camera for a few weeks from a department on campus, so that should keep me in pictures for a bit - and there are always the archives to peruse!

I realized today while online shopping for some Baby Surprise Jacket materials (I lent towards STR at first, until I read their 'orders processed in 5-10 days' statement, and as this is a last-minute request for a silent auction that is going to be held on the 17th, I switched gears & went with some Fleece Artist from the always-dependable, always-lovely The Loopy Ewe instead. An order, I might add - that shipped a mere 2 hours after I placed it!!!!!) that I never have displayed all of my wondrous gifts from my May Day Sock Swap pals. (I had my regular May Day Swap pal & then I had several other amazingly lovely women send me stuff as well - can you believe my luck????) And I figured - what else is a belated post for, if not to break the long silence with a proverbial bang? So, in no particular order - here you go - to keep things simple I'm going to figure that you guys can mostly figure out what is what - if a label isn't prominent, I'll label it for you, but otherwise.........who amongst us can't pick out a skein of STR at 20 paces? 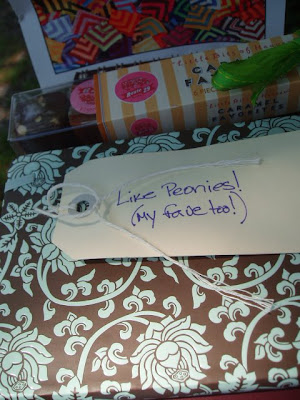 (Every package from KT had these *lovely* little labels on them!) 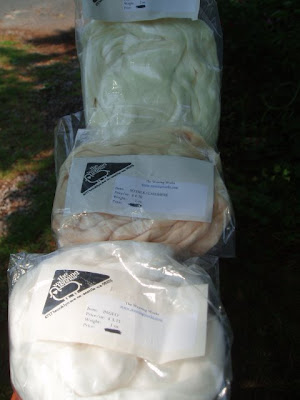 Spinning fiber - soy, soy/cashmere, and something called inigo that I've never heard of before! 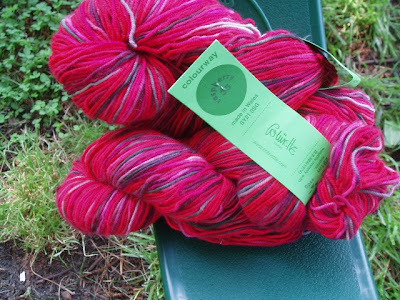 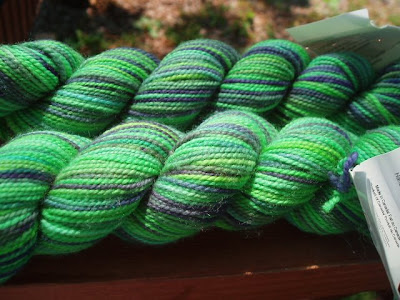 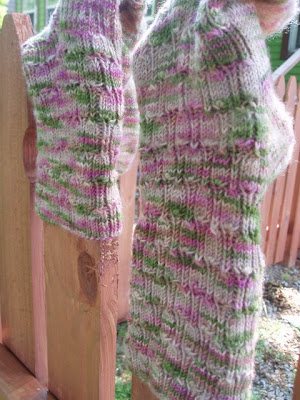 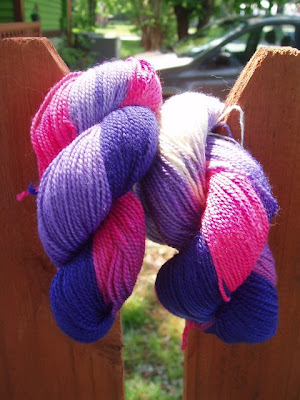 (from Marisol out in SanFrancisco - they smelt deliciously of lavender!) 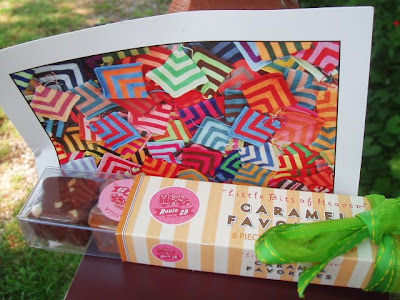 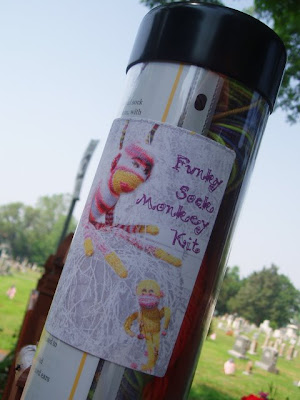 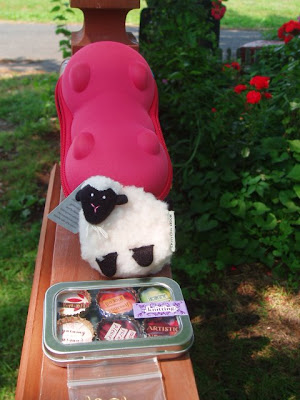 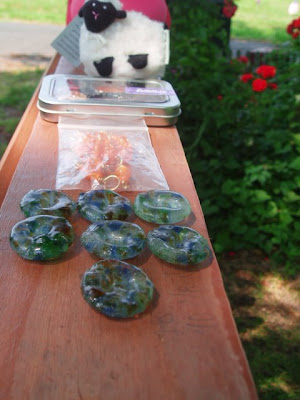 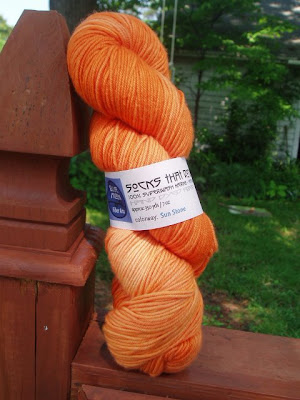 (a future cowl for me) 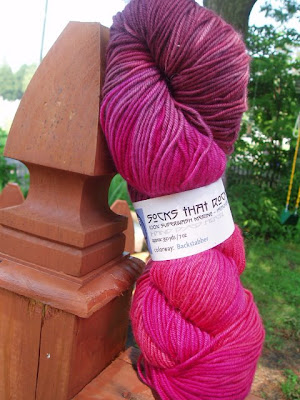 (ditto)
Well, such a long post from someone who has been silent so long! I'll re-surface yet again in a few weeks, I'm certain - with a few photos, some home-improvement details, and hopefully some new-job news as well! 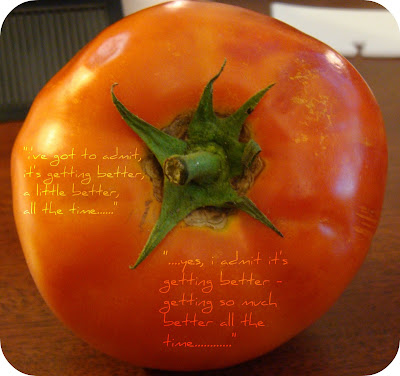 When you finally start knitting interesting things again and your mojo has finally returned, and you get around to **finally** knitting that much-belated birthday (April!) hat out of Malabrigo for your brother - you know, the crazy one who is now officially certified to do this: 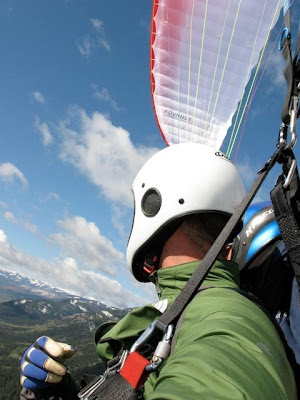 A self-portrait taken while on a paragliding solo flight. After 25 hours of lessons he's now a full-licensed lunatic who can go out on his own whenever he's got whopping amounts of cash to do so.

but who otherwise and more frequently looks like this: 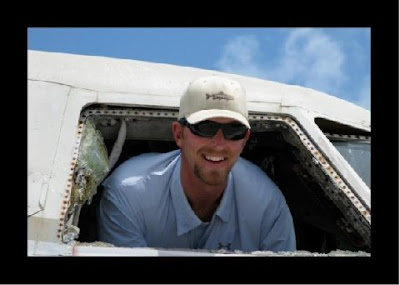 Taken during a recent trip to the Bahamas where he was doing a catalog shoot. (He's a professional photographer.) Apparently he & his gf found a ruined airplane - you know how they're always just left lying around - and so he decided to climb in.) Do you know how incredibly annoying it is to have a younger brother this good looking? (6'6" - probably 210 pounds & all muscle!) Very much so! ;>

........don't forget that he apparently has a huge noggin. Tom said that his cowboy hat size (Cowboy hat size???? Sheesh, those folks who live in Wyoming are really the only ones who think in these terms! Well, folks in Wyoming and Lyle Lovett, that is.) is a 7 & 5/8 - - which in the knitting world translates to a head diameter of 24". 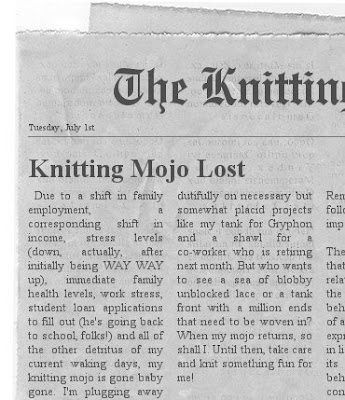 I've created a nifty, handy-dandy e-mail address so that you can e-mail me directly if you have a query that just won't wait to be posted via the comments! susanspointysticks@gmail.com